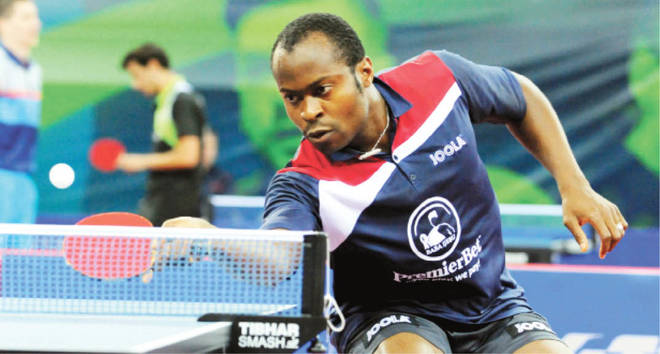 Africa number one male table tennis player Aruna Quadri, known worldwide for his attacking style of play is presently the poster boy of Nigerian table tennis.  He spoke exclusively to SHOT! on his career which has brought him fame and wealth, his relationship with Omar Assar of Egypt, his retirement plans, how Nigerian government can support table tennis and many other topical issues in the sport.

Could you give a brief introduction of yourself, including some of your past championships and trophies you have won.

I am Aruna Quadri from Oyo town in Oyo State. I started table tennis early in life. I did not start sports with table tennis. I was initially into athletics. But it was one man in Oyo Town known as Mr. Abolarinwa that introduced me to table tennis. When I started table tennis, my parents were against me playing the game because they wanted me to go to school. But when I won a cadet national championship in Lagos and they saw it in the media, since that time, they started supporting me. My first international tournament for Nigeria was at the 2007 World Championships in Zagreb, Croatia and since then I have been part of the Nigeria team. My first continental title was in 2009 when I won the African Cup to represent Africa at the international table tennis federation  (ITTF) World Cup in Moscow, Russia where I finished second in the Intercontinental Cup.

I will continuously be grateful to God for the grace He has given me to make it to the top in life. Apart from 2009, I have won several continental titles and was also named the 2014 ITTF Star Player and won the Star Point of the Year at the 2014 ITTF Star Award held in Dubai, UAE. I made it to the quarterfinal of the ITTF World Cup in Dusseldorf, Germany as the first African to make it to the quarterfinal of the Olympic games. Also winning the Polish Open is another milestone in my career. I know there are still more grounds to gain in the nearest future.

From all indications, year 2017 was the most rewarding of all the years you have so far spent in the sport…

Of course yes because in 2017, I won the ITTF African Cup in Morocco and becoming the first African to win an ITTF title outside Africa after winning the Polish Open. I achieved the highest ranking in my career by ending 2017at 21st place in the world.

You were the only African who had a tremendous rank at the end of 2017. How happy were you achieving this feat?

It was a great feeling but it is another avenue to continue to work hard. It is a big task ahead because I have to keep up the pace.

What do you intend to do to improve your ranking in 2018 having started the year as the 20th best table tennis player in the world?

I intend to compete in more competitions and hope for the best results.

Your major opposition in table tennis in Africa is Omar Assar. What really is your relationship with the Egyptian?

Omar Assar is a good friend and in 2017, we were doubles partner. We respect each other and the rivalry between the two of us is healthy for Africa.

What is your view about Olajide Omotayo and other young players making waves in international tournaments and how do you think they can improve themselves?

Omotayo and others are trying to make their mark and I believe with more hard work they can get up there. They just need to be focused and not to give up.

I think supporting table tennis will take a lot of young people off the streets. Not only table tennis, I believe attention should be given to other sports because not everybody will play football. I think they should support other sports too.

Many players could not survive without a coach, yet you became known worldwide without having a coach. Now that you have one, what has been the difference between then and now?

I think the coach in my club – Sporting Lisbon in Portugal has been very helpful and the coach will only help you to do the right thing because everything depends on the player. So having a coach is helpful but the player himself must also be ready to learn.

In 2014, you became the ITTF World Player of the Year. Do you see yourself as achieving ITTF world player again before you retire? If yes, what are your plans towards that direction?

There are lots of great players now all over the world but I believe it is possible as I just need to work harder and make sure I raise my ranking in the world. It is possible with more hard work and God’s favour.

What are your future plans in tennis after retirement? And when do you hope to retire?

As long as my body carries me, I will continue to play. I have a first degree from the Atlantic University in United States and this is an online degree that I did two years ago and I hope to continue to learn and hope that after the game I can go into service having been engaged by the Nigeria Security and Civil Defence Corps (NSCDC).

What role has sponsorship played in your career? Is it necessary for a player to be sponsored before he or she can become successful?

Sponsorship is key in table tennis because table tennis is not paying big money like football. So, for you to get exposed, you need to attend more competitions and it is through sponsorship that you can get the money to attend competitions. When attending competitions, you have to pay for flight, accommodation, feeding and registration for the tournament. So, in table tennis, sponsorship is vital and that is what has been helping me and most top players. I must thank Joola and PremierBet for their support and I hope more athletes can benefit from this gesture.

What are your immediate plans for the next world championship?

I plan to do well and make my country proud because it is a team event.

How do you intend to assist the young generation in Nigeria from becoming like you in the future?

We just need to be supporting them as I am presently supporting six athletes with kits. Each of them receives about 500euro equipment quarterly. I hope more top players can come to the aid of the younger players.